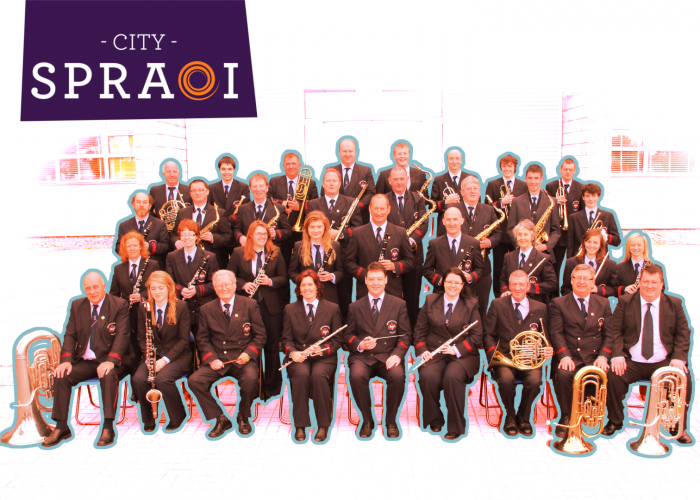 Spraoi presents a showcase of Waterford talent and varied musical styles from acts that have been friends and collaborators of the festival for many years. It is a joy and an honour to re-unite them with live audiences after such a long absence from entertaining you.

Born out of The Waterford Academy of Music & Arts, the all-new WAMA Drumming Band will thunder into the Spraoi Festival this August with their unique blend of toe-tapping beats and head-bopping grooves. With influences from Rock, Techno, Metal and Hip Hop, expect energy, noise and fun!

This brass band has been making music in Waterford since its formation in 1870.  In that time, they have contributed richly to the cultural and social life of Waterford and have been an enduring presence in the ever-changing narrative of the city.  The band has been involved with Spraoi since its inception in 1993 and has enjoyed very strong artistic links right through to the present day.   At this re-imagined Spraoi, they will perform a selection of popular music pieces from their ever-expanding repertoire.

A band made up of 10 musicians based in Dungarvan. Coming together for fun, something to do, and to share the enjoyment of music, Deise Brass specialise in jazz music, some of which is now over 100 years old, originating from New Orleans, Dixieland, Swing and Jazz standards from the roaring 1920′ and ’30s.

Their unique sound makes them regulars at jazz clubs in the South East, including the Peaky Blinders Jazz Club in the vintage Tea Rooms in Waterford City.  Deise Brass are also regulars at various festivals, most notably in Doonbeg International Jazz Festival, Co Clare and Guinness Cork Jazz Festival Kinsale as well as local festivals, the Harvest Festival and the Waterford Festival of Food.

Tadhg Williams is a 23-year-old songwriter and poet originally from Waterford, now based in Dublin. His music has become known for its lyricism and heart-on-sleeve melodies endearing him to an already significant fanbase. Williams’ releases to date have received significant support across Irish media with Hot Press describing him as “one of Ireland’s most thrilling emerging songwriters”. Often writing about his hometown, his songs and poems are both deeply personal and deeply familiar.

The Lower East Side Quartet has been bringing Jazz to Waterford audiences since 2017 and is compromised of some of the south-east’s most in-demand session musicians. The group prides itself on presenting classic Jazz material to new audiences while emphasising the spontaneity and energy that has come to define the genre.

Conor Clancy is a Pop, Funk and Soul artist from Tramore. He’s known mainly for his music project, TOUCAN, with the single “We Fell For Miles” has reached over 1.5 million streams on Spotify. He’s played support for Nile Rodgers & CHIC as well as performing in the Royal Albert Hall and has worked with many Irish artists such as 1000 beasts and the Backroad Smokers Club, some of whom will join him on stage at Spraoi.

A firm favourite with the Spraoi audience, this Waterford brass band believe in bringing something new to its audience, a tradition that goes back 87 years. For the Spraoi Festival 2021, their special festival repertoire will feature the hits of ABBA. The members will be suitably attired and are always a huge hit with audiences, so please pop along and enjoy the fun.

Amber and The Bear

It’s a Lovely Day for a Hike! – Irish Premiere

The Spaces We Hear – Irish Premiere

A Handful of Dreams – Waterford Premiere

N.E.S.T. – The Cabinet of Curatrocities